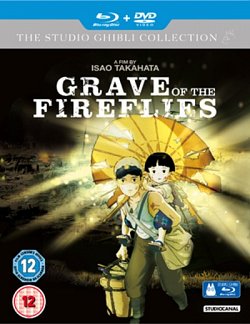 Grave Of The Fireflies 1988 Blu-Ray+DVD

Based on the semi-autobiographical novel by Akiyuki Nosaka, this haunting Japanese anime tells the story of two children, 14-year-old Seita (voice of J. Robert Spencer) and his four-year-old sister Setsuko (Rhoda Chrosite), who are struggling to survive in 1940s war-torn Japan where bombings by American warplanes and napalm attacks are an almost daily occurrence. When their mother is killed in an air raid, and the fate of their Naval officer father remains unknown, the children are left to fend for themselves. After a brief and uncomfortable stay with a cold and distant aunt, who makes it clear that she doesn't want to be burdened with them, they run away and set up home in an abandoned bomb shelter. For a while they find some happiness living on their own with a field of almost magical fireflies to keep them company. But as the rationing of food grows more unbearable, Seita finds it an increasing struggle to keep himself and Setsuko alive.