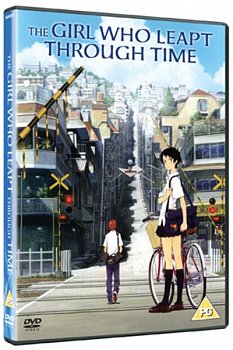 Girl Who Leapt Through Time 2006 DVD

Sci-fi anime feature adapted from Yasutaka Tsutsui's 1965 novel 'Toki o Kakeru Shojo'. High school student Makoto Konno (voice of Riisa Naka) discovers that she possesses the ability to travel through time and space, and uses the gift to readjust past events in her favour. However, as she learns that every change she makes has the potential for serious repercussions in the present, Makoto is forced to continually revisit the past in order to put right the wrongs she has unwittingly created, eventually realising that everyone's allotted time, even those who can travel through it, is finite.