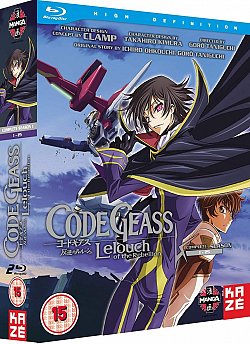 All 25 episodes, as well as the nine picture drama episodes, from the first season of the Japanese anime. In an alternate near-future world, Japan has been invaded by the Holy Empire of Britannia and renamed Area 11. Lelouch (voice of Jun Fukuyama), an exiled Imperial Prince of Britannia posing as a student, finds himself at the eye of the storm as the ongoing conflict for the island nation rages around him. Through a chance meeting with a mysterious girl named C.C. (Yukana), Lelouch obtains the power of Geass, which makes people obey his every order - and transforms himself into the masked leader of the rebellion known as Zero, whose mission is to destroy Britannia once and for all. The episodes are: 'The Day a New Demon Was Born', 'The White Knight Awakens', 'The False Classmate', 'His Name Is Zero', 'The Princess and the Witch', 'The Stolen Mask', 'Attack Cornelia', 'The Black Knights', 'Refrain', 'Guren Dances', 'Battle for Narita', 'The Messenger from Kyoto', 'Shirley at Gunpoint', 'Geass Vs Geass', 'Cheering Mao', 'Nunnally Held Hostage', 'Knight', 'I Order You, Suzaku Kururugi', 'Island of the Gods', 'Battle at Kyushu', 'The School Festival Declaration', 'Bloodstained Euphy', 'At Least With Sorrow', 'The Collapsing Stage' and 'Zero'.