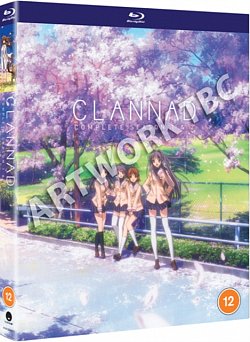 Livrare estimata pentru 27 Aug - 06 Sep
Adauga in cos
Adauga in Wishlist
Descriere: Acest film nu are subtitrare in limba romana.
All the episodes from the first two seasons of the Japanese anime about a schoolboy whose life changes when he meets a group of mysterious girls. Unhappy at school and depressed about his father's difficulties with alcohol, Tomoya Okazaki (voice of Yuichi Nakamura) doesn't have much hope for his future prospects. However, when he meets Nagisa Furukawa (Mai Nakahara) he promises to help her revive the school's drama club. Along the way Tomoya meets four other girls with problems of their own and he finds himself gaining a new outlook on life as he helps them. In the second season Tomoya and Nagisa prepare to graduate from school and their relationship goes from strength to strength as they consider their future prospects. Season 1 episodes are: 'On the Hillside Path Where the Cherry Blossoms Flutter', 'The First Step', 'Once Again After Crying', 'Let's Find Friends', 'The Scenery With a Carving', 'The Older and Younger Sister's Founder's Festival', 'Star-Shaped Feelings', 'The Wind That Vanishes Into the Twilight', 'Until the End of the Dream', 'The Girl Genius' Challenge', 'The After School Rhapsody', 'Hidden World', 'Garden of Memories', 'Theory of Everything', 'Stuck Problem', '3 On 3', 'A Room Without Anyone', 'Counter Measures', 'A New Life', 'A Hidden Past', 'Face Toward the School Festival', 'Two Shadows', 'The Events of Summer Holidays' and 'Another World: Tomoyo Chapter'. Season 2 episodes are: 'The Goodbye at the End of Summer', 'Search for False Love', 'Disagreeing Hearts', 'With the Same Smile As That Day', 'The Season You Were in', 'Forever By Your Side', 'Her Whereabouts', 'Valiant Fight', 'En Route On the Sloped Road', 'Season of Beginnings', 'The Promised Founder's Festival', 'Sudden Events', 'Graduation', 'A New Family', 'In the Remains of Summer', 'White Darkness', 'Summertime', 'The Ends of the Earth', 'The Road Home', 'The Tidal Breeze's Mischief', 'The End of the World', 'Small Palms', 'The Event from One Year Before', 'Under the Green Tree' and 'Another World - Kyou Chapter'.
Din aceeasi serie:
Chrome Shelled Regios - The Complete Collection DVD Chrono Crusade - The Complete Collection DVD Clannad - The Complete Collection DVD Clannad After Story - The Complete Collection DVD Clannad/Clannad: After Story - Complete Season 1 & 2 2009 Blu-ray / Box Set (Limited Edition) Code Geass: Akito the Exiled 2017 Blu-ray Code Geass: Akito the Exiled 2017 Blu-ray / Limited Edition Code Geass: Film Trilogy + Re;surrection Blu-ray / Limited Edition Box Set Code Geass: Lelouch of the Re;surrection 2019 Blu-ray Code Geass: Lelouch of the Re;surrection 2019 Blu-ray / with DVD (Collector's edition box set)