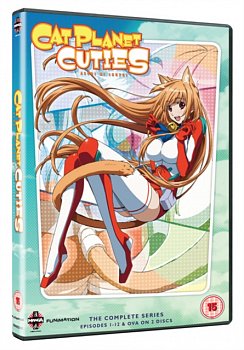 Livrare estimata pentru 01 Sep - 11 Sep
Adauga in cos
Adauga in Wishlist
Descriere: Acest film nu are subtitrare in limba romana.
All 12 episodes, as well as the OVA episode, from the anime following the adventures of a nerd who finds himself caught in the claws of an alien race of frisky cat-girls. When Kio (voice of Mutsumi Tamura) meets Eris (Kanae Itou) he is struck by her alluring appearance and unusual ears. However, given that he is drunk at the time, he is unable to form clear judgments - a stark contrast to the next morning when he awakes to find himself and Eris sought after by the CIA and a rival race of dog aliens. The episodes are: 'The Cat That Came to Earth', 'I Came to Play', 'I Came to Stay', 'I Came to Kidnap', 'I've Come to Save You', 'We Have Practiced', 'I Have Come to Swim', 'We've Come to Duel', 'The Ultimate First Assist-a-roid?', 'We've Come to Aim', 'We've Come to Search', 'We've Come to Find It' and the OVA episode 'Come Drop By'.
Din aceeasi serie:
Casshern Sins - The Complete Series DVD Castle Town Dandelion Blu-Ray Castle Town Dandelion DVD Castlevania: Complete Season 2 2018 Blu-ray Castlevania: Season 1 2017 Blu-ray Cautious Hero - The Hero Is Overpowered But Overly Cautious... Blu-ray / with Digital Copy Cautious Hero - The Hero Is Overpowered But Overly Cautious... Blu-ray / with DVD and Digital Download (Limited Edition) Cautious Hero - The Hero Is Overpowered But Overly Cautious... DVD Cells at Work!: Complete Collection 2018 Blu-ray Chaos Head: The Complete Series 2008 DVD