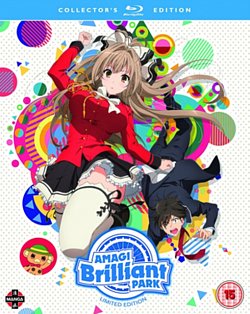 All 13 episodes from the first season of the anime based on Shoji Gatoh's light novel. When Seiya Kanie (voice of Kouki Uchiyama) is asked to visit an amusement park by the reserved Isuzu Sento (Ai Kakuma), Seiya's narcissism leads him to believe that Isuzu is asking him on a date. When he arrives however, he discovers that the place is relatively rundown and that he has been brought there in order to become the park's new director. The park is inhabited by magical creatures who are sustained by the happiness of others and if the park does not bring in at least 500,000 visitors in the next three months it will be destroyed and the land given over to a real-estate company. The episodes are: 'Not Enough Visitors!', 'Not Enough Time!', 'Not Enough Reinforcement!', 'Not Enough PA Productivity!', 'Not Enough Money!', 'Not Enough People!', 'Not Enough Pool Safety!', 'Not Enough Love!', 'Not Enough Teamwork!', 'Nothing Can Be Done!', 'Nothing to Worry About Now!', 'Nobody Knows What the Future Holds!' and 'Not a Good PV!'.