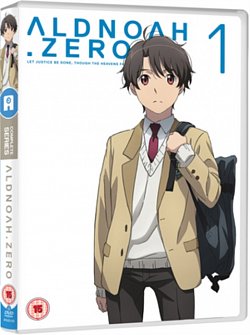 All 12 episodes from the first season of the Japanese mecha anime set in a world in which humans began migrating to Mars in the 1970s and formed the Vers Empire. The rivalry between Earth and the Vers Empire ignites again years later in 2014 when Asseylum Vers Allusia (voice of Sora Amamiya), the Vers Princess, is attacked whilst on a peace mission on Earth and she is presumed dead. On Earth, Inaho Kaizuki (Natsuki Hanae) is training to become a Kataphrakt pilot for the military. When Inaho comes into contact with a disguised Asseylum some of her powers transfer to him and Inaho helps conceal the princess until she can safely contact her family on Mars and stop the impending war. The episodes are: 'Princess of Vers/Princess of Mars', 'Beyond the Horizon/The Longest Day On Earth', 'The Children's Echelon/Boys On the Battlefield', 'Point of No Return/Knight in Pursuit', 'Phantom of the Emperor/Ahead of an Audience', 'Steel Step Suite/Island of Memory', 'The Boys of Earth/The Two Meet Each Other', 'Then and Now/A Day When We Saw a Bird', 'Darkness Visible/Reminiscent Device', 'Before the War/Til Going to Be a Storm', 'Wind, Snow and Stars/Battle of Novosterisk' and 'Childhood's End/Even Though the Heaven Falls'.