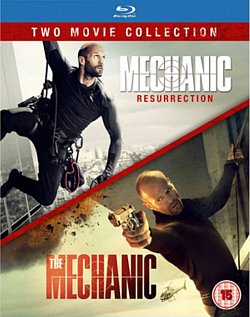 Anunta-ma cand pot comanda
Adauga in Wishlist
Descriere: Acest film nu are subtitrare in limba romana.
Double bill of action films starring Jason Statham. In 'The Mechanic' (2011), after his best friend and mentor Harry (Donald Sutherland) is murdered, professional hitman Arthur 'The Mechanic' Bishop (Statham) sets out to wreak his revenge on those responsible. When Harry's son Steve (Ben Foster) asks if Arthur will take him on as an apprentice, the two look set to become the deadliest duo in town. However, complications soon arise as the young student starts to outstrip his master. In 'Mechanic - Resurrection' (2016), after retiring as a contract killer, Bishop attempts to put his murderous past behind him by starting a new life in Brazil with girlfriend Gina (Jessica Alba). However, when Gina is kidnapped by a formidable enemy, Bishop is ordered to carry out three seemingly impossible assassinations on very high profile targets if he wants to see her alive again. Facing a race against time, Bishop must do all he can to complete his objectives before it's too late.
Din aceeasi serie:
The Man With The Iron Fists Blu-Ray The Man With The Iron Fists DVD The Marine 5 - Battleground 2017 DVD The Mask of Zorro 1998 DVD / Collector's Edition The Mask of Zorro/The Legend of Zorro 2005 Blu-ray The Mechanic / Mechanic - Resurrection DVD The Mechanic Blu-Ray The Mechanic DVD 2011 The Meg 3D Blu-Ray The Meg 4K Ultra HD