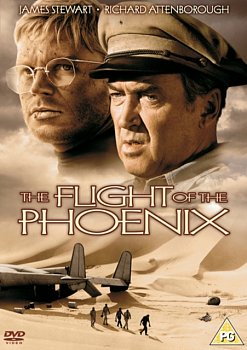 The Flight of the Phoenix 1965 DVD / Widescreen

Livrare estimata pentru 24 Dec - 03 Jan
Adauga in cos
Adauga in Wishlist
Descriere: Acest film nu are subtitrare in limba romana.
Robert Aldrich directs this adaptation of Elleston Trevor's novel starring James Stewart and Richard Attenborough. After their plane crashes in the middle of the Sahara Desert, pilot Frank Towns (Stewart) and navigator Lew Moran (Attenborough) do their best to keep order among the survivors, a group of oilmen not used to the hardships of the desert. Whilst struggling to survive, the group of men try to engineer a way back to civilisation by building a new plane from the wreckage of their old one but they face many obstacles in their pursuit of success. The cast also includes Hardy Krüger, Peter Finch, Ernest Borgnine and Ian Bannen.
Din aceeasi serie:
The Fast and the Furious Tokyo Drift 4K Ultra HD + Blu-Ray The Fearless Hyena 1979 Blu-ray / Limited Edition The Fifth Commandment DVD The Final Flight DVD The First Emperor 2006 DVD The Forbidden Kingdom Blu-Ray The Forbidden Kingdom DVD The Forgotten Soldiers DVD The Four DVD The Gentlemen 2020 Blu-ray