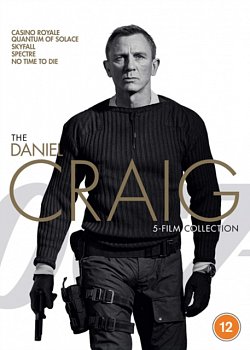 Livrare estimata pentru 11 Jul - 21 Jul
Adauga in cos
Adauga in Wishlist
Descriere: Acest film nu are subtitrare in limba romana.
Collection of James Bond films starring Daniel Craig in the lead role. 'Casino Royale' (2006), based on one of the original Ian Fleming novels, follows a young Bond at the beginning of his career having just received his '00' status. For his latest mission, 007 travels to Montenegro to investigate the highly exclusive Casino Royale where Le Chiffre (Mads Mikkelsen), a money man for an international terrorist group, is raising funds for their misdeeds through high-stakes gambling. The rookie MI6 agent, aided by British Treasury agent Vesper Lynd (Eva Green), is tasked with infiltrating the group and ultimately defeating the rogue player, both on and off the tables. 'Quantum of Solace' (2008) sees Bond turn his sights on those who were controlling his aid agent Lynd in their last outing. While interrogating Mr White (Jesper Christensen), Bond discovers that the shadowy organisation responsible for blackmailing Lynd is a lot more powerful and dangerous than he ever imagined. In 'Skyfall' (2012) Bond's loyalty to M (Judi Dench) is tested as her past comes back to haunt her, and Bond's own doubts about his life and livelihood start to creep in. As MI6 comes under attack and Bond is sent to Shanghai to investigate, he must keep his focus on tracking down and destroying the threat - no matter how high the personal cost. In 'Spectre' (2015) a cryptic message leads Bond on a rogue mission to Rome where he meets Lucia Sciarra (Monica Bellucci), the widow of a notorious crime lord. On infiltrating a top-secret meeting, Bond discovers the existence of the global crime organisation SPECTRE and sets about trying to expose them and ultimately bring them down. Finally, in 'No Time to Die' (2021), five years after his retirement from active service, Bond finds himself struggling to adapt to an everyday life absent from the thrills of his former profession. However, when 007 is called upon for one final mission to track down missing scientist Valdo Obruchev (David Dencik), Bond must confront the demons of his past and once again become the skilled and deadly agent required to bring down terrorist Lyutsifer Safin (Rami Malek).
Din aceeasi serie:
The Courier 2019 DVD The Courier DVD The Dam DVD The Daniel Craig 5-film Collection 2021 Blu-ray / 4K Ultra HD + Blu-ray (Boxset) The Daniel Craig 5-film Collection 2021 Blu-ray / Box Set The Debt Collector 2018 DVD The Eagle 2010 Blu-ray / Limited Edition The Eagle Blu-Ray The Eagle DVD The Elimination Game DVD