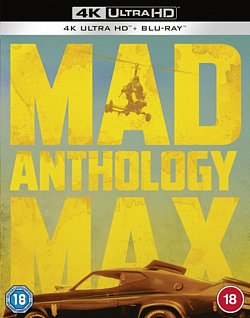 Livrare estimata pentru 03 Jun - 13 Jun
Adauga in cos
Adauga in Wishlist
Descriere: Acest film nu are subtitrare in limba romana.
All four movies from the action film series directed by George Miller. 'Mad Max' (1979), set sometime after an apocalyptic war, depicts a world in which the police have their hands full fighting roving motorcycle gangs. When the wife and child of cop Max (Mel Gibson) are murdered by one of the gangs, he sets out to get revenge. In 'Mad Max 2' (1981), following the road-side slaughter of his family, ex-cop Max roams the post-apocalyptic landscape alone. Reluctantly taking a pit-stop at a desert-set fortress, Max is gradually persuaded to help protect the people inside it and the commodity that makes it a prime target for marauding gangs - fuel. In 'Mad Max: Beyond Thunderdome' (1985) Max, arriving in Bartertown in search of some stolen property, has to fight a duel in the Thunderdome arena. He is exiled to the desert by Bartertown's ruler, Auntie (Tina Turner), where he is rescued by a community of feral children. In 'Mad Max: Fury Road' (2015) Max (Tom Hardy) has been captured by a gang, led by the tyrannical Immortan Joe (Hugh Keays-Byrne). In order to escape Max teams up with Imperator Furiosa (Charlize Theron), a woman who wants to travel across the desert and find her way back home. But, after liberating five female captives from Joe's clutches, she too must escape from the crazy gang leader and his henchmen. Can they make it across the desert in one piece?
Din aceeasi serie:
Mad Max 2 - The Road Warrior DVD Mad Max 3 - Beyond Thunderdome Blu-Ray Mad Max 3 - Beyond Thunderdome DVD Mad Max Anthology (4 Films) Blu-Ray Mad Max Anthology (4 Films) DVD Mad Max Blu-Ray Mad Max DVD Mad Max Fury Road 4K Ultra HD Mad Max Fury Road Blu-Ray Mad Max Fury Road DVD