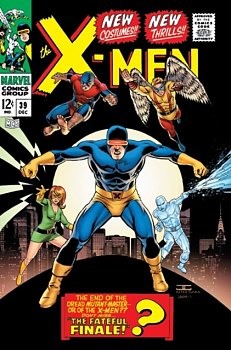 The original X-Men — Cyclops, Beast, Angel, Iceman and Marvel Girl — star in uncanny adventures that brought the first era of mutant mayhem to a close! This Omnibus is filled with milestones — from the team’s new costumes and the death of Professor X, to the first appearances of Havok, Polaris and Sunfire! But when Roy Thomas united with Neal Adams, they produced one of the most amazing evolutions in Marvel history! These two titanic talents brought the X-Men in sync with the thriving youth culture of the late ’60s. Adams’ lavish and dynamic visuals merged with Thomas’ challenging and contemporary stories to create a comic book series that throbbed with the pulse of the times like no other! COLLECTING: X-Men (1963) 32-66; Avengers (1963) 66; Ka-Zar (1970) 2-3; Marvel Tales (1964) 30; Not Brand Echh (1967) 4, 8