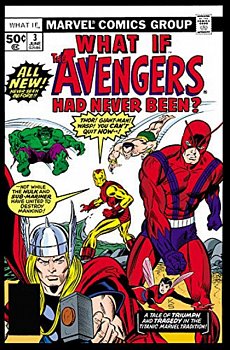 What If? Classic: The Complete Collection Vol. 1 (comics)

The first twelve awe-inspiring issues of the most awesomely off beat series off all time - collected in one sense-staggering volume. Twelve titanic tales of triumph and tragedy in the mighty Marvel tradition! Spanning from: What if Spider-Man Joined the Fantastic Four? to: What if the Fantastic Four had Diff erent Super-Powers? Daredevil's secret exposed? The identity of Thor passed down to another? A new Hulk? Multiple Spider-Men? Some of the ideas that shook Marvel's foundation got their start right in the realm of remote possibility overseen by the wondering Watcher! But can even Uatu believe his eyes when Jack "King" Kirby rewrites himself and his fellow legends as the Fantastic Four?