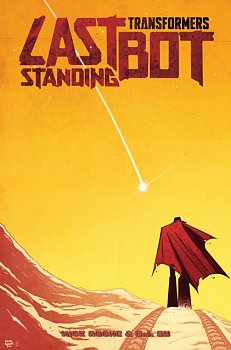 The war for Cybertron is over. But when a self-exiled hero awakens to a world under invasion, he realizes the war from Cybertron will never end.

The planet Donnokt sits on the edge of the universe, far away from all the stars that are flickering and fading out. It is a world on the precipice of revolution--industrialization--taking its first steps into the realms of the mechanical. When Visitors arrive on this far edge of nowhere, they threaten to reveal the secret Rodimus has given up his life to protect. With carnivorous mechanical lifeforms threatening its inhabitants' very existence, Donnokt will never be the same again. But its protector has one last job to do: can he rid the world of the Visitors or will someone else be the Last Bot Standing?