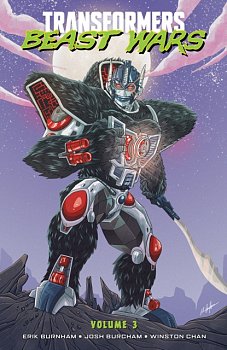 It’s the showdown you’ve been waiting for, just not the one you expected! Will a Maximal-Predacon alliance be enough to defeat a new enemy that threatens both teams?

The Beast Wars rage on! After the Maximals' assault on the Predacon base, both sides are looking for a win. But they find more than they anticipated, as a treasure trove of energon and the secret behind the aggressive mutant animals that inhabit the planet are unveiled and the Children of the Vok make themselves known! Can Optimus Primal and Megatron bring their teams together, or will Cheetor, Nyx, Waspinator, Blackarachnia, Rattrap, and the rest fall one by one? Plus, before the epic climax, see how the Cybertronians spend their days, with three stories of life away from the front lines!