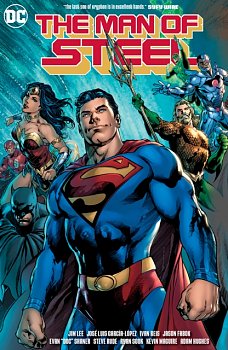 The Man of Steel (comics)

Genre-defining author Brian Michael Bendis makes his triumphant debut at DC Comics, as a new evil comes to Earth looking for Superman to finish the mission he started long ago: exterminating the Kryptonian plague!

A new era begins for Superman as an ancient threat comes to Earth looking to erase the last remnants of the Kryptonian race. The Last Son and Daughter of Krypton must now battle a threat that claims it is responsible for the death of their home planet, Krypton. As his world begins to come down around him, Clark Kent also wonders: where is his wife and son, Lois Lane and Superboy?

Featuring some of comics most innovative artists including Ivan Reis, Evan "Doc" Shaner, Ryan Sook, Kevin Maguire, Adam Hughes, and Jason Fabok. Legendary scribe Brian Michael Bendis dives headfirst into the DC Universe in this precursor to his debuts on both Superman and Action Comics.

Collects The Man of Steel #1-6