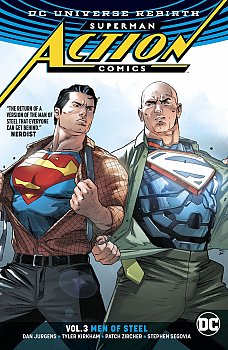 Lex Luthor says he’s a hero. He’s even taken to wearing the Superman “S” on his armor. And so far, though he’s unable to trust him, Superman can’t find any evidence that Lex is anything but what he claims to be. But for the mysterious alien warrior evidence isn’t necessary. He’s been granted a vision of the future where Lex ascends to Darkseid’s throne on Apokolips and crushes Earth beneath his heel. Now Superman finds himself in the unlikely position of having to defend his greatest enemy from certain death... Can Superman possibly save Lex from overwhelming odds?