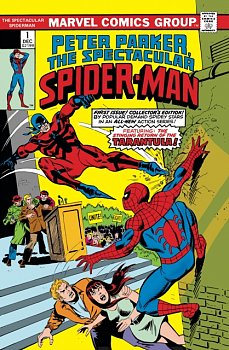 In honor of 60 years of Spider-Man, the web-slinger's second solo series gets the Omnibus treatment! SPECTACULAR SPIDER-MAN not only increased the opportunities for Spidey action, it provided a platform to expand upon and explore the world of Peter Parker and his incomparable cast -- J. Jonah Jameson, Mary Jane Watson, Flash Thompson and the gang! Of course, there was no shortage of villains, including the Vulture, the Lizard, Doc Ock and more! SPECTACULAR was also home to Frank Miller's first Daredevil artwork, part of a sprawling saga featuring Carrion, the mysterious rotting horror with hidden ties to Peter Parker's past -- and a violent desire to punish him for the death of Gwen Stacy! Painstakingly restored, this is an Omnibus for the ages!