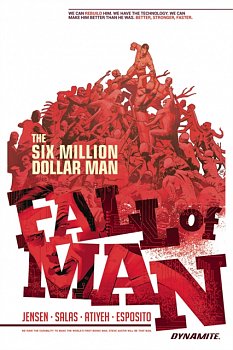 The year is 1979. Iran has seized American hostages. Columbian drug cartels run rampant. Amid this deeply troubled world, Steve Austin - the legendary Six Million Dollar Man - is America's best hope in its fight against innumerable enemies. When Steve discovers disturbing secrets in OSI's past, he uses his cybernetic upgrades to rebel against the agency... but he'll face plenty of threats, like an enemy cyborg, lasers, and ninjas!

"A call-back to the original television series with a fresh, exciting new story." - Word of the Nerd

"A sleeper success for a seventies reboot that feels like it's rebuilding a franchise." - Multiversity Comics