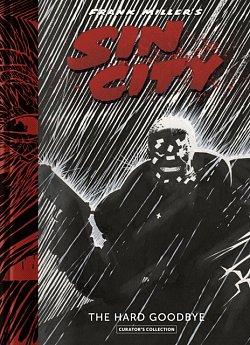 Frank Miller is arguably the most important cartoonist (writer AND artist) working in comics over the last 25 years. Mr. Miller is back in the spotlight with the release of DC's Dark Knight III: The Master Race in late 2015. Frank Miller's Sin City: The Hard Goodbye Curator's Collection includes the entire Eisner Award-winning graphic novel, now scanned from the original artwork in Frank Miller's personal archives and reproduced at the actual size he originally drew it.

Twenty-five years after its first publication in the pages of Dark Horse Presents, get ready to experience one of the most groundbreaking graphic novels of all time as few have ever seen it!

"Miller [is] the most important comic book artist of the last 25 years." -Los Angeles Times