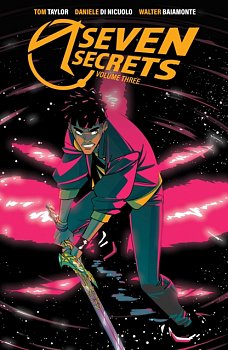 The FINAL CHAPTER of the critically acclaimed, action-packed series!Eva and Caspar escape the Seekers' Headquarters, but the secret of Caspar's identity threatens the bond between them. Can they find Amon in time before he uses the Books of Nostradamus to unleash his ultimate plan? Unthinkable tragedies and shaken loyalties aboud, while the loss of a trusted ally shakes Eva to the core. Will the Order be able to stop the inevitable in time? And, after the truth of Caspar's origins is finally revealed, Caspar is faced with a decision of the future of the order, and the very nature of the secrets themselves! Best-selling author Tom Taylor (DCeased), along with artist Daniele Di Nicuolo (Mighty Morphin Power Rangers) and colorist Walter Baiamonte deliver the pulse-pounding conclusion of the fan-favorite series! Collects Seven Secrets #13-18.