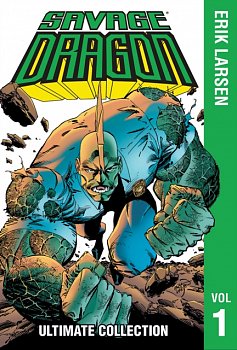 How's this for a 30th anniversary spectacular?!! Image Comics is proud to present, for the first time ever, a MASSIVE hardcover collecting the inaugural miniseries and first eight issues of the ERIK LARSEN's groundbreaking SAVAGE DRAGON ongoing series, reprinted in glorious full color for the first time in decades, along with all the extras from the first two trade paperback volumes and even MORE on top of that!

SAVAGE DRAGON: THE ULTIMATE COLLECTION, VOL. 1 is a can't-miss for any burgeoning Fin-Addict looking for an easy way to start this long-running and influential series from the beginning. Also includes an introduction by ROBERT KIRKMAN!