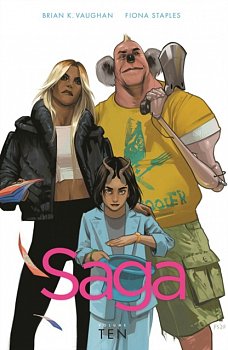 A CONTEMPORARY CLASSIC CELEBRATING A DECADE OF EXCELLENCE!

At long last, Hazel and herstar-crossed family are finally back, and they've made some new...friends?This collection features the latest six chapters of the most epic adventure incomics, including the series' double-sized first issue back from hiatus. Collects SAGA #55-60. Romeo & Julietmeets Star Wars in this genre-blending, sci-fi/fantasy space opera about starcrossed lovers from enemy worlds.

An epic for mature readers, Saga follows newparents Marko and Alana as they risk everything to raise their child amidst anever-ending galactic war. A multiple award winning, critically acclaimedmasterpiece and one of the most iconic, bestselling comic book series of itstime. The SAGA series has sold over 6.8million copies to date across all formats, has been translated into 20languages, and has garnered multiple Eisner and Harvey Awards, plus a HugoAward, British Fantasy Award, Goodreads Choice Award, Shuster Award, InkwellAward, Ringo Award, and more.

It has been featured in such mainstream mediaoutlets as TIME, Entertainment Weekly, The Atlantic, NPR, and beyond, and hasbecome a pop culture phenomenon.