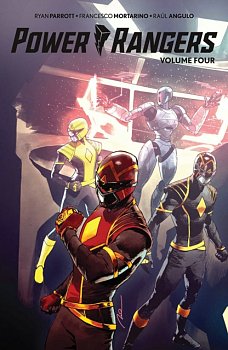 Can the Omega Rangers survive to deliver critical intel about the Empyreals to Zordon and the Power Rangers?IT ALL ENDS HERE! Now that the truth of the Empyreals is revealed, the Omega Rangers must race to Earth to help the Mighty Morphin Power Rangers against the fearsome Eltarian force. Meanwhile, Lord Zedd struggles with where his loyalties ultimately lie, having finally discovered who was truly behind the sabotage of the Zeo Crystal all those years ago. With the fate of Earth and the entire universe hanging in the balance, can Lord Zedd and Zordon set aside their conflict long enough to stop the Eltarians? In the midst of a galactic war, new threats and unexpected alliances will change the Power Rangers universe forever! Superstar writer Ryan Parrott (Mighty Morphin Power Rangers/Teenage Mutant Ninja Turtles), fan favorite artists Francesco Mortarino (Firefly: Bad Company), and Marco Renna (Fathom) bring the Eltarian War event to an epic conclusion! Collects Power Rangers #13-16.