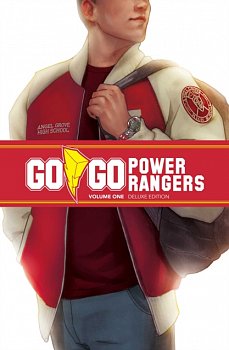 if it wasn't for the dastardly Rita Repulsa, her minions, and their plan to defeat the Power Rangers once and for all. And if that wasn't hard enough, the original Rangers also have to deal with keeping their new lives secret from a sixth member of their pre-Morphin Grid circle. Their friend Matthew Cook wasn't chosen by Zordon, but will our team be able to keep their new identities from him even when their distant, dark future collides with their new beginning? By popular demand, the first half of the seminal Go Go Power Rangers series by superstar writers Ryan Parrott (Mighty Morphin Power Rangers/Teenage Mutant Ninja Turtles) and Marguerite Bennett (Batwoman, Animosity) with fan favorite artists Dan Mora (Once & Future), Eleanora Carlini (The Amazing Spider-Man), Ilaria Catalini, Jordan Gibson, Derek Charm, Xiao Tong Kong, Jon Lam, and Jim Towe is collected for the first time in a deluxe hardcover format.