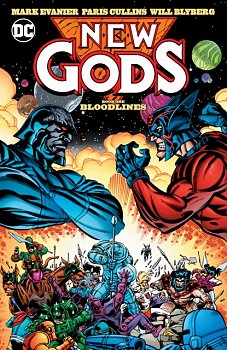 The gods have returned!

Created by artist and writer Jack Kirby in 1971, the New Gods combined Kirby's love for science fiction with mythic tales of good versus evil, paving the way for what would become his epic Fourth World saga. More than a decade later, writer Mark Evanier (Blackhawk, The House of Mystery) and artist Paris Cullins (Blue Devil) revisited the worlds of New Genesis and Apokolips, bringing back fan-favorite characters such as Orion, Lightray, Metron, Kalibak, and the nefarious Darkseid.

Picking up after the events of the "Cosmic Odyssey," the ongoing war between the New Gods comes to Earth yet again as Darkseid continues his single-minded pursuit of the Anti-Life Equation and an even greater power--the Source itself! Fortunately, Orion and his allies are never far behind, but with each battle Orion is put in greater danger of succumbing to the violent urges of his bloodline. Torn between his idealistic upbringing and his dark birthright, Orion ventures deep into the bowels of Apokolips, seeking the one person who might be able to pacify his inner turmoil--his mother! Will Orion finally gain the closure he seeks, or will darkness consume him?

New Gods Book One: Bloodlines carries on the spirit of Kirby's space opera for a brand-new era! Collects New Gods #1-14.