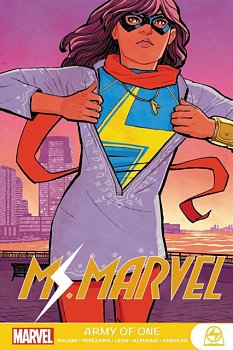 Earth's mightiest Inhuman! The world almost ended - but now it's better than ever for Ms. Marvel! Her loved ones survived, she's a symbol of hope for her neighborhood - and she's an Avenger! Everything's coming up Kamala Khan! But then why is Ms. Marvel the face of gentrification in Jersey City? Who's that girl holding hands with Bruno? And how is just one Kamala supposed to juggle family life, school and superheroics? Things only get more complicated as the super hero community heads toward a second civil war - and Ms. Marvel is torn between her idol, Captain Marvel, and her Avengers mentor, Iron Man. As the escalating conflict strikes close to home, Kamala will have to grow up fast - and find her own way to be a hero!