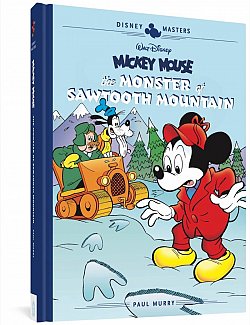 Adventure-seeking Mickey doesn't usually regret being Chief O'Hara's freelance detective -- but all bets are off when the Chief pitchforks Mickey and Goofy into saving Cousin Frosty's winter resort from a monster! From snowballs to cliffside falls, deadly accidents have Sawtooth Mountain in an uproar ... and if a man-eating yeti isn't responsible, who is? And Sawtooth Mountain is just the start! Mickey confronts mystical elves in Pineapple Poachers... and is forced to reform the villainous Pegleg Pete in Mickey's Strange Mission! A recreation of the stories' original Dell Comics color is icing on the cake.

Fantagraphics' Disney Masters series unearths a treasure trove of previously unavailable comics epics in the grand Walt Disney tradition: expanding the lore of Mickey, Donald, and Scrooge, anthologizing the work of fan-favorite North American talents, and bringing you the best of the acclaimed international artists who have popularized Disney around the world. Rediscover Duckburg... and rewrite history!