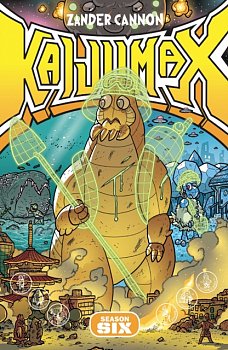 The sixth and final volume of the critically acclaimed Kaijumax series by Zander Cannon, a socially conscious comic about monsters in & out of prison.

FINAL SEASON! From across the galaxy, a terrifying alliance of alien warships enters our atmosphere. Inmates of both Kaijumax prisons suit up for the filthy, dangerous work of battling the alien threat out in the world, all in a bid to lessen their thousand-year sentences. Amid the fiery chaos, offspring will be reunited with their parents, antediluvian grudges will be fulfilled, and new, monstrous crimes will be committed.