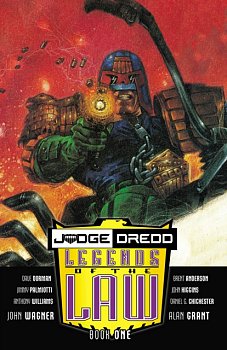 Judge Dredd: Legends of the Law: Book One (comics)

DC Comics take on Mega-City One's toughest lawman! Launched in late 1994 to coincide with the release of the 1995 Judge Dredd movie, Legends of The Law was a 13-issue series published by DC comics and initially written by Judge Dredd co-creator John Wagner and his (then) writing partner, Alan Grant.

This book collects the first seven issues for the first time since their original publication. The madness and majesty of Mega-City One are perfectly captured in these full-colour, all new stories, Judge Dredd is presented with a host of colourful villains, including the organ-harvesting, musical-obsessed Dr. Bliss!