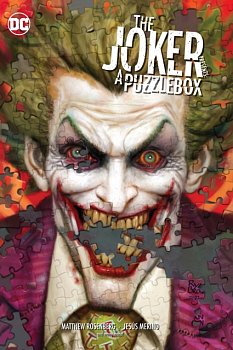 It's story time! The G.C.P.D have a mysterious corpse, a magical box, and a murderer's row of the city's most dangerous villains sitting in a jail cell. Now all they need to figure out is what exactly happened. Fortunately, one suspect is willing to talk.

Unfortunately, it's The Joker The mystery of WHO KILLED THE RIDDLER heats up as Joker, now incarcerated and under interrogation by Commissioner Jim Gordon, retells his version of events, starting with the victim himself on the hunt for an all-powerful weapon. How did the other Gotham villains get involved, and why? What does this weapon do, and why does Riddler want it? Who had skin in the game, and who could stand to lose everything? It s a whodunit spiraling out of control, retold by the world s most unreliable narrator. See if you can spot the clues and solve the puzzle!

Collects The Joker Presents: A Puzzlebox #1-7!