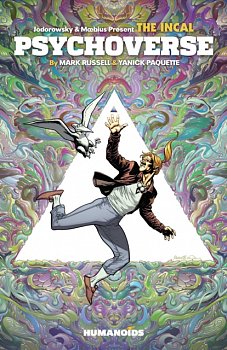 Prepare to enter...the Psychovesre! In a shocking and explosive prequel to the legendary and best-selling saga, The Incal which is soon to be a major motion picture from Academy Award-winning director Taika Waititi (Thor: Ragnarok, JoJo Rabbit)The world of the Incal, the Matterverse, is full of strange technology, astonishing worlds, and extraordinary creations. But where do these things come from? Why, the Psychoverse, of course--a reality of infinite possibility where everything that can be exists...that is, until it is dreamed up in the Matterverse, at which point it is then pulled from one reality into the other. Tired of having their wondrous creations stolen by the Matterverse, agents of the Psychoverse breach the barrier between realities to reclaim their stolen property by force, which means the destruction and reclamation of nearly the entire universe! It is up to John DiFool, the Metabaron, Kill Wolfhead, and more to stop the destruction of their entire reality! If only any of them knew the most powerful, primordial forces in either universe was sitting just within their grasp...the Luminous Incal!