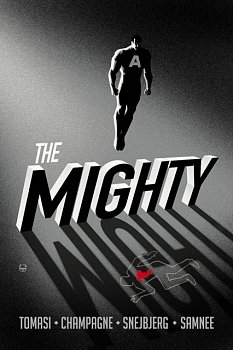 As the world's only superhero, Alpha One is anicon of hope to all mankind...but at what price? While the population isinspired from a distance by their savior, police captain Gabriel Cole has gottenclose enough to discover the mystery behind Alpha One's public origin; andthat his twisted plans to create a utopia are more dangerous than anyone coulddream! This MIGHTY edition collects all twelve issues of the acclaimed series,three rare eight-page stories and a treasure trove of behind-the-scenes sketchesand script. * From Peter Tomasi (Blood tree,Light Brigade, House of Penance, The Bridge), Keith Champagne (The Switch,Daybreak!, Frank N. Stein), Chris Samnee (Firepower, Daredevil), and PeterSnejbjerg (B.P.R.D.) with a new cover by Dave Johnson!