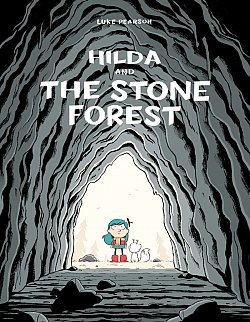 Hilda may be grounded, but that won’t stop her from heading off on another daring adventure! But everything is thrown off course when her mother catches her and is dragged along for the ride. Furious with each other, the bickering pair find themselves lost in the land of the trolls, forced to embark on a dangerous journey to make their way home. And to make matters even more difficult, Hilda has to do so . . . as a troll? Buckle your seatbelts for a crazy body-swapping adventure!

Luke Pearson is the artist and writer of the Hilda series of graphic novels. He has fast become one of the leading talents of the United Kingdom and United States comics scene, garnering rave reviews from the New York Times and the School Library Journal. He was the winner of the Young People's Comic category at the British Comic Award in 2012, and he has been nominated for the Eisner Award's Best Publication for Kids and Best Writer/Artist in 2013. He has recently written and storyboarded multiple episodes of the cult classic show Adventure Time. He lives in Bristol, United Kingdom.

Luke Pearson: "I am an illustrator and cartoonist. I draw comics and do various kinds of illustration work, including illustration for magazines and newspapers, book covers, poster design and development work for animation. I have written and storyboarded a number of episodes of the tv series Adventure Time. I am the creator of the Hilda series of comics. My other comics work includes Everything We Miss and various shorter stories and strips."