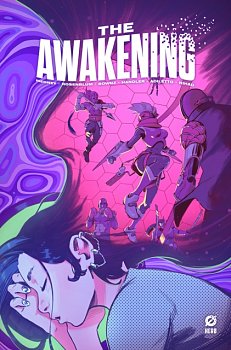 What are we willing to do as a society to fulfill our sensory needs? This growing problem in our current society of the "10 second attention span" is interpreted through the lens of futuristic technologies. We pose the question, "What would the experience be like, if we could live while we sleep?" But just like with all technologies, there's an unknown cost that comes due.

Yun-Yeong Bin AKA "Rip" is a 24-year old Asian-American girl who lives two different lives. One is that of a gaming star and streamer in the world's perennial VR Game, FUTURE -- accessed by a state of the art sleeping pod that doubles as a VR port that allows your body to rest while you escape into your virtual life. Perfect for the Gen Z'ers.

Rip's other life is not quite as glamorous. In the real world, Rip is an underachieving (but not due to lack of smarts) master's student who is only in engineering to appease her overbearing father.

Pulled between both personas, Rip even lives a double life inside the VR world. To escape the spotlight, she secretly plays as her best friend Wes' avatar "Kobe", who was gifted to her after Wes died from brain cancer..

While playing as Kobe one day, Rip is approached by another player who mistakes her for Wes. This encounter spawns a chain of events that will bring to light a nefarious coverup, challenging everything Rip knows and loves...

Blurring the line between realities.