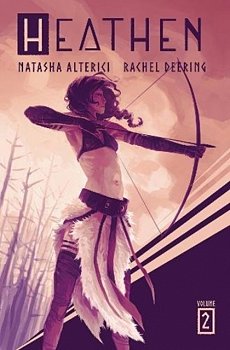 Aydis the banished viking sets sail on the open sea to reach Heimdall, the magical entrance to the land of the gods. She'll need the help of a crew of worldly pirate women and man-eating mermaids to survive the dangerous journey. Back on land, the cursed Valkyrie Brynhild and the goddess of love Freyja are chipping away at Odin's power, testing the god-king's patience and tempting his wrath.

IGN -- "Heathen returns from its break and it remains one of the best comics on the stands... I just want to spend more time in this world, and really, isn't that the reaction you should have to art?"

ENTERTAINMENT WEEKLY -- Alterici's innovative saga - about a queer Viking woman who is exiled for her sexuality and reacts by declaring war on Odin himself - initially came out in digital form only. Now, interested readers can catch up on the story's beginning in one place with its first trade collection.

THE A/V CLUB -- The series operates on two levels: It's a sweeping Nordic fantasy, but it's also a personal story about coming out and coming of age in a culture that doesn't accept who you truly are. The intersection of those two narrative planes is what makes Heathen so engrossing, and the grander elements of the plot have more emotional impact because they are tied to Aydis' queer awakening.

BITCHMEDIA -- Alterici is that rarest of comic writers whose sense of story and pacing is equal to her tremendous artistic skill.