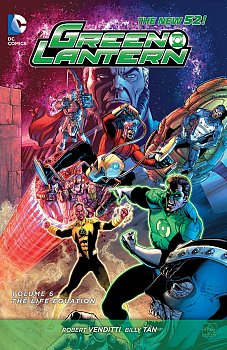 On a higher plane of existence, the incredible beings known as the New Gods have waged an eternal war against the cosmic tyrant called Darkseid. Now their quest to break the deadlock and defeat their nemesis has led them to the power rings of the Lanterns. They mean to seize the rings, reforge the emotional spectrum, and unlock the Life Equation—a weapon capable of reshaping reality itself.

And if the Green Lanterns must be sacrificed, so be it.

Hal Jordan may be the commander of the Green Lantern Corps—our universe’s first line of defense—but he is only human. What hope does a mortal have against an army of gods?

Writer ROBERT VENDITTI (THE FLASH) and artist BILLY TAN (New Avengers) pit the DC Universe’s mightiest, most mind-blowing being against one another in GREEN LANTERN VOL. 6: THE LIFE EQUATION (collects GREEN LANTERN #35-40 and GREEN LANTERN ANNUAL #3), a saga of cosmic combat like none that has ever come before!