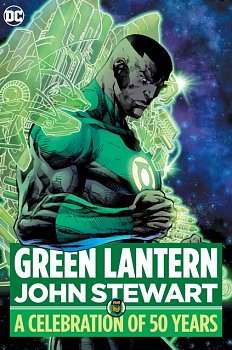 Five decades after his first appearance, this volume collects the greatest moments of the ground-breaking, fan-favorite Green Lantern, John Stewart!

Created by comic book legends Dennis O'Neil and Neal Adams, John Stewart changed both DC's fictional universe and the comics industry itself. Introduced as a substitute for Hal Jordan, DC's primary Green Lantern, John Stewart was DC's first Black superhero, and over the years grew from a back-up player to a main character and arguably the most recognizable Green Lantern. Stewart starred in the Green Lantern series for a time and later his own series, Green Lantern: Mosaic, and was featured in other media adaptations including the beloved Justice League cartoon.

Fifty years following John Stewart's debut, this collection highlights the character's greatest moments over the decades--both space-faring and Earth-bound--from his first appearance in the legendary O'Neil/Adams Green Lantern run, to taking over from Hal Jordan as Earth's Green Lantern, and being rechristened as the first mortal Guardian of the Universe.