Home » Comics » Gandhi: My Life Is My Message 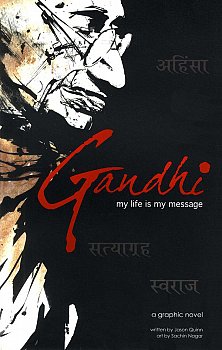 Gandhi: My Life is My Message (comics)

Mohandas Gandhi was a freedom fighter with a difference; rather than forcing change with the barrel of a gun, he sought to change the world with love and nonviolence. In this epic saga we grow alongside Gandhi from his childhood in the Indian State of Gujarat, through his studies in London during the 1890s, and on to his political awakening in South Africa. We then return with him to India and join his nonviolent struggle to free his nation from the shackles of the British Empire.

How did this shy, unassuming lawyer transform himself into the leader of India’s freedom movement? Renouncing wealth, ambition and comfort, Gandhi led by example, becoming one with the people he sought to free, facing imprisonment, hardship and humiliation while never raising his voice in anger. His strategy of nonviolent protest would become the model for the US civil rights movement led by Martin Luther King, Jr. and continues to change history throughout the world.

Mohandas Karamchand Gandhi, better known as the "Mahatma or Great Soul", took on the might of the British Empire armed only with a message of love and non-violence. In "Gandhi: My Life is My Message" graphic novel we discover the man behind the legend, following him from his birth in the Indian coastal town of Porbandar in 1869, to the moment of his tragic death at the hands of an assassin in January 1948, just months after the Independence of India.