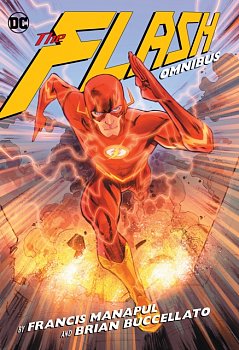 Struck by a bolt of lightning and doused in chemicals, police scientist Barry Allen was transformed into the Fastest Man Alive. Now, he's Central City's favorite superhero, using his incredible abilities to fight crime and protect his city's citizens as the Flash!

But saving the world has earned the Flash some powerful enemies: Gorilla Grodd, the impossibly strong and intelligent King of Gorilla City, Captain Cold, Heat Wave, Mirror Master, Glider--along with the rest of the super-villains that make up the Rogues.

And then there's his most dangerous enemy of all...someone whose abilities are equal to the Flash's, who draws his power from the same source: the mysterious energy field known as the Speed Force. The Scarlet Speedster is in for the race of his life to defeat a nemesis who represents the opposite of everything he holds dear!

The acclaimed creative team of Francis Manapul and Brian Buccellato reimagined the Fastest Man Alive for a brand new era, and their high-speed adventure has become an instant classic with both critics and fans alike. Now, their legendary run is collected in its entirety for the first time in this omnibus hardcover edition!