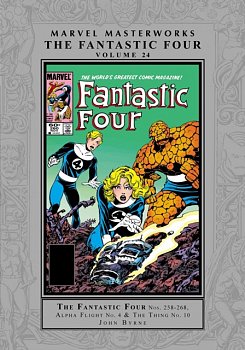 Combining a cosmic scope with a heartfelt, earthbound humanism, John Byrne's run on Fantastic Four remains a high point in Marvel history. Marvel Masterworks continues its collection of that epic era, pitting the FF against Terrax the Terrible, the former herald of Galactus now in the thrall of Doctor Doom! Then, the classic "Trial of Reed Richards" puts the FF's leader in the stand of a Shi'ar courtroom for the crime of rescuing the god-killer Galactus! The Torch and Thing take on the Mole Man, the Beyonder cometh and welcome to the FF, She-Hulk! Plus: In one of the most emotional stories in comics history, a desperate Reed and Sue place the fate of their unborn child in the hands of Otto Octavius.