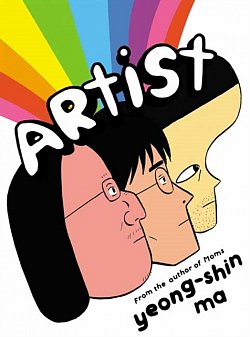 The satirical saga of three artists seeking recognition. But there can be only one Artist. A novelist, single, forty-four years old.

A painter, divorced, forty-six years old. A musician, single, forty-two years old. On the outer limits of relevancy in an arts culture that celebrates youth, these three men make up the artist group Arcade.

Caught in circular arguments about what makes real art and concerned about the vapid interests of their younger contemporaries, none of them are reaping the benefits of success. But there s always another chance to make it. When it comes time, out of the three, who will emerge as an acclaimed artist? More important, when one artist s star rises, will he leave the rest behind? Following Yeong-shin Ma s hit manhwa, Moms, this plunge into artistic friendships is as hilarious and infuriating as it is real.

With absurdist style and off-beat humour, Artist simultaneously caricatures and complicates the figure of the artist. The friendships between the three are impassioned and mercurial, resulting in conflicts about fashion choices, squabbles with foreign children, and changes in one another's artistic fortunes for better and worse. As the story progresses we see the ways that recognition or lack thereof moulds each character s outlook, whether they will be changed by the scene or end up changing it to fit their ideals.