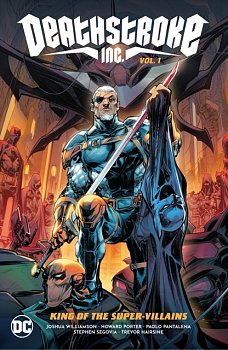 DC s deadliest assassin gets a major upgrade, a new mission, and a new partner Black Canary? Slade Wilson joins a secret organization to take down the biggest villain! After suffering too many losses, Slade Wilson decides it s time for a change. When he s enlisted to work with an ages-old secret organization called T.R.U.S.T. who want to take down the heavy-hitter villains, he s all in.

They ll supply him with an all-new team and resources for his new mission into the depths of the weirdest parts of the DCU, including a new partner Black Canary! Wait what?! What kind of missions does T.R.U.S.T. have in mind for Slade? How about heading into deep space and stop Cyborg Superman from spreading his consciousness to every machine in the Multiverse! But as they battle the dangers of space, Black Canary begins to uncover the truth about T.R.U.S.T and exactly why they want to control Deathstroke Maybe T.R.U.S.T. isn t so trustworthy after all.

This volume collects Deathstroke Inc. #1-7 and a story from Batman: Urban Legends #6.