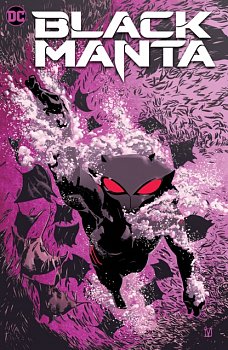 The scourge of the seven seas takes the starring role for the first time, as Aquaman s archnemesis embarks on a mission all his own! After decades plaguing Aquaman and the rest of the DC Universe, Black Manta stars in his own story for the first time! Black Manta is chasing a rare metal with incredible powers, and he s not the only one who wants to get his hands on it, friend and foe alike! Torrid is a former ally who has escaped hell (literally!) to answer the call of the metal, but can Manta trust her? Hopefully so because he might need her help to fend off Devil Ray, a new competitor for the role of the biggest villain underwater. Discover Black Manta s secret connection to Atlantis and witness his surprising act of heroism! Will he stay on this path, or does ice water continue to run through his veins? The events of Black Manta and Aquaman: The Becoming lead directly to new series Aquamen, starring both Arthur Curry and Jackson Hyde! This volume collects Black Manta #1-6, the full series, and a prelude story from Aquaman 80th Anniversary 100-Page Super Spectacular #1.