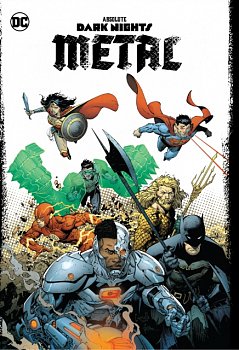 Welcome to a DC event unlike any other! One that will push Batman, Superman and heroes of the Justice League beyond their limits to take on threats unlike any our world has ever seen! It will take the combined might of the World s Greatest Heroes as you ve never seen them before to face what s coming their way! The Dark Knights ride through the farthest reaches of the Multiverse to track down the unlikeliest of teams: The Flash, Cyborg, Raven and Detective Chimp. The mission: keep these heroes from completing their desperate quest to save all of existence! Plus, Batman is forced to face off against his greatest fears while trapped in the Dark Multiverse! These tales and more are collected in Absolute Dark Nights: Metal, which contains Dark Nights: Metal #1-6, Batman: Lost #1, Dark Nights: Metal Director s Cut #1, and Dark Knights Rising: The Wild Hunt #1!