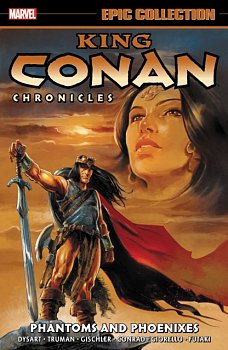 Uneasy lies the head that wears a crown! Conan has won the throne of the kingdom of Aquilonia — and the hand of a beautiful bride. Is it time for the Barbarian to lay down his sword? Don’t count on it! Because when an evil sorcerer attacks, King Conan must strike back with all his might! Securing a crown is one thing, but holding onto it is a whole other challenge — especially with scheming conspirators in Conan’s court! But the traitors may have chosen the wrong ally: Thoth-Amon! Plus, King Conan is haunted by the ghost of his first — and perhaps greatest — love!