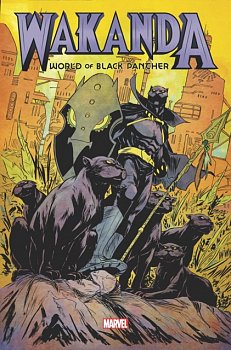 The wondrous nation of Wakanda is full of stories — whether they star the Black Panther, his staunchest allies or his fiercest foes! Relive the rise of T’Challa through tragedy and triumph! Join his sister Shuri as she balances her spiritual side with her technological genius! Discover how the boy named N’Jadaka became the deadly Erik Killmonger! See the Black Panther battle Deadpool; assemble the mighty Agents of Wakanda; and tackle a Harlem murder mystery along with his Crew — Storm, Luke Cage, Misty Knight and Manifold! Plus action-packed tales featuring the Dora Milaje, the Midnight Angels and more from the world of Wakanda!