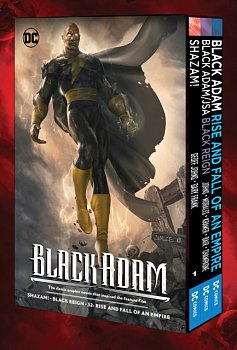 Thousands of years before Billy Batson became a magically-empowered hero, the wizard Shazam selected another champion. Teth-Adam or Mighty Adam began as a hero of humanity, but then allowed his power to corrupt his ideals and desires. Now labelled Black Adam, he was exiled by Shazam, but returned in the modern day.

A frequent enemy to Earth s heroes, Black Adam believes he is the right person to lead humanity and any action he takes is necessary for the greater good. Collecting Black Adam/JSA: Black Reign (New Edition), Shazam! Vol. 1, and Black Adam: Rise and Fall of an Empire, this box set is perfect for any Black Adam fan! In Black Adam/JSA: Black Reign (New Edition) Black Adam brings old world justice to Kahndaq as Hawkman seizes control of the JSA and brings them to the turbulent Middle East for an epic battle! In Shazam! Vol.

1 Young orphan Billy Batson has bounced from foster home to foster home, but when he s drawn to the Rock of Eternity, he is imbued with powers beyond those of any mortal man! Can he learn how to handle those powers in time to defeat Black Adam? Weaving together tales of a world after the Infinite Crisis, Black Adam: Rise and Fall of an Empire follows Teth-Adam, better known as BLACK ADAM during the year without Superman, Wonder Woman, and Batman!