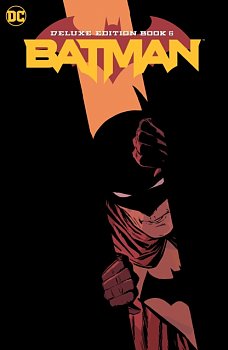 Now that Batman has escaped the Knightmares, he s starting to see the forces rallying against him-and that his father from another universe has joined the other side. The Caped Crusader finally digs into the mystery of how Thomas Wayne, a.k.a. the Flashpoint Batman, escaped the collapse of his dimension and ended up in this part of the Multiverse.

In the quest to get Bruce Wayne to hang up the cape and cowl, Thomas Wayne is going to have to use a little tough love. Only, not all the muscle behind it will be his own. It s Bruce Wayne versus Thomas Wayne, and all of Gotham City hangs in the balance! Discover the City of Bane as Batman is nowhere to be found or at least not a Batman anyone recognises.

It ll take a familiar face to bring the Dark Knight back to Gotham and it s Selina Kyle who holds the key. Will Batman be able to take down Bane s army and reclaim his city? How will Flashpoint Batman be vanquished from this dimension? Read these tales and more in Batman: The Deluxe Edition Book 6 collects Batman #70-71, 73-85, Batman Annual #4, and Batman Secret Files #2.