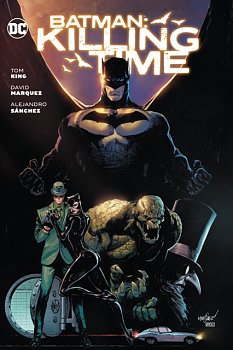 Two of the new, colourful rogues, Riddler and Catwoman, have just pulled off the heist of the century, robbing Wayne-Gotham Securities, getting away with 1.5 million in cash. After the robbery, after a few dead guards, with all of Gotham including Batman searching for them, they meet with their backer, Penguin, the man who will wash their money, take his cut, and secure their escape. And Riddler shoots Penguin in the gut, grabs the loot, and turns to Catwoman. 'It's ours, all of it. All we got to do is escape this city.' Riddler and Catwoman take to the road, both weighing how long they can go before they need to take the other out. And as they move about the city they're hunted by an inexperienced Batman who knows two things: One, he'll need to be better than he's ever been to catch these two psychopaths; two, Penguin survived and if he gets to them first, it'll be a bloodbath like Gotham's never seen. Three villains, one Dark Knight, and a deadly heist gone wrong. Catwoman, the Riddler, and the Penguin join forces to pull off the greatest robbery in the history of Gotham City. And their prize? A mysterious and priceless artifact in the secret possession of Bruce Wayne! But, as the events unfold, what fun is a heist without a bloody double-cross or two? The blockbuster team of Tom King and David Marquez brings an epic, white-knuckled, action-packed tale of a young Batman desperate to recover his most prized possession from a host of violent rogues before the clock strikes the Killing Time... Batman: Killing Time collects the entire 6-issue limited series!